Since 1931 people have been sitting here together with a “Schoppen” of apple wine and typical Frankfurt specialties.

Since its construction in 1902, an apple wine tavern has been located in the Schweizer Strasse 71 in Frankfurt-Sachsenhausen. Adolf Wagner and his wife Leni acquired the estate in 1931, a risky endeavor, especially in the midst of the Great Depression. However, after extensive renovation the first glass of wine was already served on 19th December 1931. Apple wine is an annual drink and should be drunk in the course of one year after being pressed. Since this date the apple wine tavern Adolf Wagner is family owned, now already in its third generation.

The Sachsenhausen gastronomes were primarily apple wine landlords. Before the Second World War there were more than fifty companies committed to home-grown apples and processing them to delicious apple wine. If necessary, more fruit was bought from the surrounding villages in the Taunus, Odenwald, Spessart, especially as the production of apple wine was only a supplementary income for the gardeners.
Adolf Wagner had the best qualifications for running such a business coming from a family who had been running a Heckenwirtschaft for generations. This is the apple wine tavern KLAANE SACHSENHÄUSER which was founded in 1886 and is also still family-owned.

Adolf and Leni realized fast how to get their guests’ recognition – when you consider that at that time only locals went to taverns. In 1933 their first daughter Helma was born, in 1937 daughter Susanne and 1944, in the midst of bombings, their third daughter Elfriede. Their wish for a male heir was not fulfilled. This was a serious blow for Adolf, because in the understanding of that time only a male successor was able to continue such a business.

During the Second World War not much fruit was allowed to be pressed to juice, in 1943 the company was even shut down by the state. Until 1948 the family lived solely on horticulture. But then things picked up again and the tavern and fruit press were put back into business. The green pine wreath, a typical feature of apple wine taverns, was hung up again over the entrance. The wreath was only taken down when the last barrel was empty, or if there was too much work in the gardens. It could even happen in Sachsenhausen that the last apple wine was drunk at the end of the summer and was not able to be served again until December when the wines that had been pressed in October were matured.

The first guests after the war had to make do with pear wine (the pears came from Switzerland) – better than nothing! After a long time of waiting for ripe fruit in the orchards around Frankfurt the first proper wine pressing could be resumed. The business flourished from this day on and provided the basis for an urgent renovation and modernization of the Wagner house. The old cast-iron stove which was in the middle of the tavern was replaced by a heating system, new restrooms and a new cold store raised the standard to a new level. However, in 1968 the family had a fateful blow. With only 66 years of age company founder Adolf Wagner died of a heart attack. The business was continued by his widow until 1970. She handed the traditional tavern which was now already known well outside the Frankfurt boundaries over to her two younger daughters Susanne and Elfriede.

The structure of the guests changed over the years. One reason may have been the new “team” with a certain youthful touch or that apple wine was gaining ground in the beverage culture. The glass of wine was suddenly “in”. In addition, the food selection was widely extended. In 1972, the boom led to a further modification, which mainly affected the kitchen and the cellar. 25 years after Susanne and Elfriede had taken over the business, they handed the management over to their sons Ralf Wagner and Harald Rudorf.

This change was also accompanied by a modernization of the interior and an extension of the attractive garden, with great emphasis put on the prevailing traditional ambience. Now it is possible to manage also large group reservations quickly and efficiently. The third Wagner generation management is proud of six children, so that the fourth generation in the “Wagner” in the Schweizer Straße seems to be set. The family history continues in the spirit of its founder.

“Ebbelwoi” is the only official way of saying “apple wine” in Frankfurt and beyond. The apple wine itself – although not the variety now popular in the State of Hesse – was already known to the ancient Greek and Romans.

Fruit wine has a long tradition in regions where growing grapes is difficult because of the climate or the soil. The kind of apple wine often called “Cidre” is a sweeter variety with more alcohol contents. In the State of Hesse, apple wine is made the traditional way without adding sugar and with complete fermentation.

Apple wine can be preserved in the same way as other wines. Traditionally, however, this is done by using a very small percentage of sour fruit which make the apple wine clear and preserve it. One of the traditional fruit varieties for this is called “Speierling”, which isn’t even an apple at all, but comes from the family of rowan/mountain ash fruit.

Apple wine – especially when it is “spritzed” with mineral water – is often seen as a beverage. However, it is indeed a genuine fruit wine and a pure, natural product if it is pressed properly and made the traditional way. Then its taste does have a certain acidity/tartness, but it is no more bitter than any other wine, too.

All this together is called the magic triangle.
If you ever tried to drink a “Bembel” all by yourself, then you’ll know why. 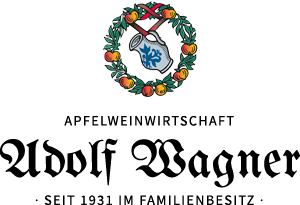 you can find us here